I’ve got a few days of notes and pictures to put together. While I’ve been in Las Vegas I haven’t had much time to put my thoughts together or go through the pictures, also I didn’t feel like paying the $13 to get internet access from the hotel. 🙂

I’m in a Starbucks parking lot right now about to make my way towards Monument Valley, Utah. More to come, but here is the first post of the adventure.

The party started early. At 6am after a couple nights of very limited sleep. I’d spent the last couple days frantically packing and trying to get everything that I had left where it needed to go. (For as long as I’ve spent planning and packing and staging and prepping for departure it still ended up that I could have spent a little more time getting ready. I got 99% done at that would have to do.)

We headed south with half a tank of gas and a destination of The Redwood National Forest as our first official stop. The van was plastered with the magnetics for the site and the (mostly) well wishes from my going away party. (In order of appearance) Eric, Myself, Chanti, and Erik were on the road. 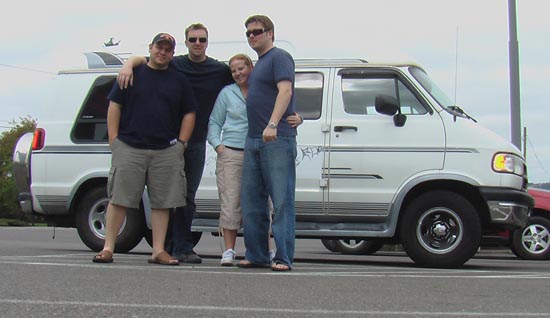 We arrived in the Redwood Forest at about 2pm and marveled at the size of these ancient giants. Oh yeah, then we tried to drive the van through one. If you notice the dark shape on top of the van in the picture, that’s me. I was able to see just how close we were to grinding our way through the tree. Everything was going well until we were about to exit the tree and it looked like we would loose our mirrors. Since I still need them until Georgia, I called it off.

We also stopped by the Tree’s of Mystery to visit the largest Paul Bunyon and Babe the Blue Ox statues in existence. The Paul statue is wired to a man-behind-a-curtain that speaks to the many children climbing over the statue. Seems the jaw was supposed to move in unison with the voice but had broken down. The hand still waved at a random interval. 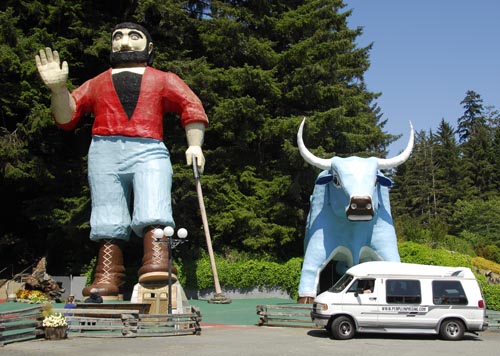 Then off to Reno which was a little further away than I’d thought it was. By the end of the day we’d put in about 1100 miles.

Filed under Round The World, United States