10 days since my last post. I’ve been keeping pretty busy, busy enough that it now feels like I have a very short time left here in Sioux City, and so much left to do.

Earlier this week I headed off to see what RAGBRAI was all about. RAGBRAI stands for: Register’s Annual Great Bike Ride Across Iowa. This year it is a 477 mile ride across Northern Iowa comprised of some 10000+ riders from all over the world. They start by dipping their tires in a river on the Western side of Iowa, ride for 5 days, and then dip their tires in an Eastern river to finish.

Sunday I arrived in Rock Rapids around 8am and the majority of riders had already set off on that day’s 77 mile leg. I drove back home for a few hours sleep and then set back out to see what the nightlife of a RAGBRAI stop was like. So back on the road to Spencer, I arrived about 7pm and saw fields and fields of tents and more bikes than I’d ever seen in one place. 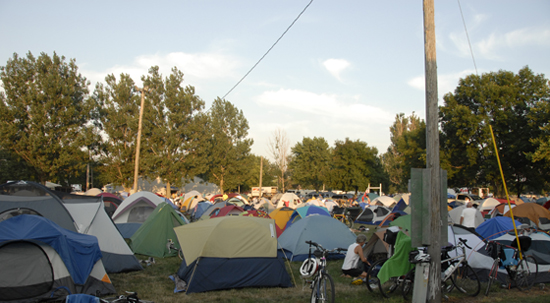 The population of Spencer, IA had literally doubled that day. The evening’s festivities were held at the Fairgrounds – although I doubt there was a single parking lot or side street that wasn’t active – I ended up spending the night drinking and people-watching in the Fairground’s beer garden until it closed at 12:30am. I made my way back to the van in a nearby parking lot and passed out.

I awoke about 5:30am to find that everyone else was already up and on the move. I wiped the sleep from my eyes, hopped in the driver’s seat, and headed off for a vantage point to get some pictures. I followed the route of the bikers, which meant I was driving with the tide. Literally it was like a stream of bikers flowing past me. I was the huge obstruction on their street and once I was in the path there was little to be done about getting out of it. I was surrounded on all sides and turning off to a side street just wasn’t an option. I didn’t get out of the mass until the route turned right and I was able to continue straight. I considered following the event to the next city but decided to drive back home instead. 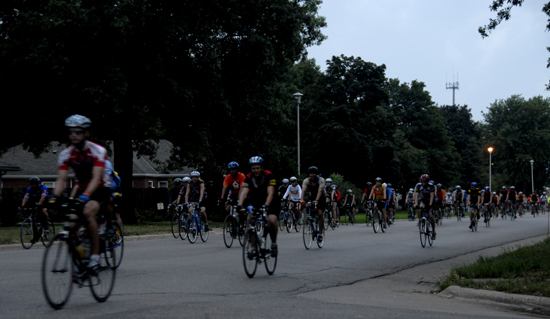 I had a lot of fun that night and riding RAGBRAI is now something that is definitely on my list. I will really have to train up though, I’m nowhere near the physical shape I’d need to be to finish the ride, but hey, goals are good.