Honestly I didn’t know what to expect from Sarajevo. I only knew a few general things about Sarajevo or Bosnia as a whole for that matter.

In 1914 someone shot Franz Ferdinand, Archduke of the Austrio-Hungarian Empire, and as a result started World War I.

In 1984 it was the site for the summer Olympic games.

In 1992 war broke out Sarajevo was the site of the longest arterial bombardments in recent history. Reports of genocide and ethnic cleansing prompted an international response. NATO forces intervened.

There was a movie called “Welcome to Sarajevo” in 1995 which attempted to deal with the war here and its atrocities. I recommend the movie but will warn you, it’s pretty heavy if I remember correctly.

Tensions have not altogether gone away and there is still a small NATO presence. I saw a green NATO bus running up and down the streets. I also saw a Landmine Action Service truck outfitted for off-road travel driving through downtown at one point. Hiking and wandering off sealed surfaces is not advised. They have yet to clear all the landmines from the war.

All of this being said, Sarajevo is still one of my favorite destinations of the trip so far.

I was put at ease just entering the country. At the Bosnian border crossing the officials boarded and requested my passport. The official was joking and smiling with me and even made me laugh. This would be the first and probably last time a border official would have this effect. They, at least in my experience, are a bunch of stoic purpose-driven employees of the state. The Bosnian guard was a refreshing exception.

Instead of the usual hostel accommodation I decided to splurge a little and get my very own hotel room. For the 1984 Olympics a Holiday Inn was built, subsequently this Holiday Inn served as the base for the international journalists during the war. I used some accumulated hotel points from my business travel to get a room there for a couple nights. It was like a vacation from hostel travel. I had my own room, with a lock on the door, my own bathroom/shower and little soaps. Never have I thought of the Holiday Inn as luxurious before.

I walked out to explore the city and wasn’t entirely sure what to expect. I what I didn’t find was a place that looked like it had been under siege. Apparently reconstruction began as soon as the war ended. I walked through the new city into the old city and the transformation was dramatic. Like walking into the past, I crossed from the new tall concrete buildings and walkways to cobblestones and short buildings crammed with shops. The wonderful smell of grilled meats from the many little restaurants hit me like a wall when I entered the old section.

The many shops contained a wide verity of crafts that appeared far more Arab influenced than European and in several alleys you could hear the copper pots being banged into shape. There were mosques directly across from Christian churches and the mosques, due to the Muslim holy month of Ramadan, were always full.

One of my favorite experiences was wandering through a public park to find a gathering of old men circled around a two foot tall chess set. The two men playing were thoughtfully walking through the pieces choosing their next move while the spectators watched intently sometimes pointing at the pieces and talking to each other, sometimes groaning at the choice the players made. I thought it was fantastic and it is something I would love to see in the parks and open spaces of Portland. 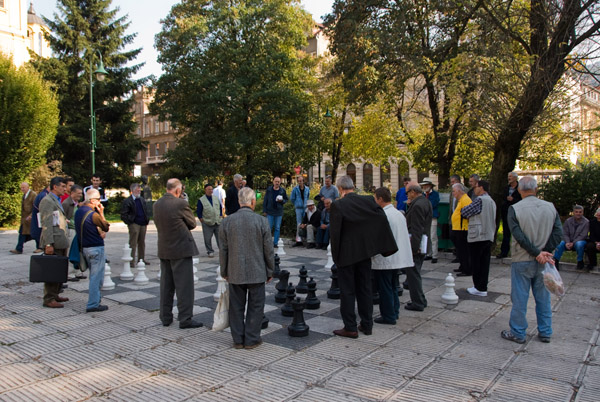 I stayed for three days, each day making my way into the old city to eat and wander through the shops, always stopping by to watch the men playing chess. I don’t know what I expected to find in Sarajevo but what I did find was a very comfortable community rebuilding itself with few tourists and a sense of history. I would recommend it to anyone and don’t forget to try the ćevapčića… tasty.

From Sarajevo it was a 26 hour series of trains to Bulgaria. I’m sure there are more picturesque parts of Bulgaria, unfortunately I didn’t see them. Sofia was more or less a stop on the way to Istanbul. Even the staff at the hostel seemed rather unimpressed with the available sites. And the majority of city was blockish and in desperate need of repair. Most of the buildings were falling apart, literally, one guy I met told me pieces of a plaster wall came down near him as he passed. The sidewalks were octagonal stone and didn’t seem to be set on anything substantial. Many many of them were unstable and shifted as you stepped on them. I was fairly concerned a few times that I would step on the wrong thing and disappear into the underground.

The hostel was certainly one of the high points of my time in Sofia. It was roomy and clean and very comfortable. The staff was very friendly and there was a huge common area stocked with DVDs and the walls were lined with couches. Breakfast was free and in the evenings there was a complimentary bowl of spaghetti with a glass of beer. I met some very cool people at the hostel, many of whom were long term travelers, ranging from 3 months to 3 years on the road. The further east I get the more serious the traveler I seem to find.

I did make my way to an 1100 year old monastery. The Rila Monastery is located on a mountain about 2 hours outside of Sofia and is an impressive compound. There is an Orthodox church in the center different from any I’ve seen so far. The icons are painted on the walls and set with raised silver halos and hands. Instead of the traditional pews the seats are all set against the walls. Hanging lamps provided the little light available in the church. Unfortunately they didn’t allow pictures.

Although I enjoyed the hostel and the people I met there, I was happy to move on to Istanbul.

Filed under Bosnia, Bulgaria, Round The World, Travel