1. How Google Is Remaking Itself As A “Machine Learning First” Company – Backchannel

Google’s bear-hug-level embrace of machine learning does not simply represent a shift in programming technique. It’s a serious commitment to techniques that will bestow hitherto unattainable powers to computers. The leading edge of this are “deep learning” algorithms built around sophisticated neural nets inspired by brain architecture. The Google Brain is a deep learning effort, and DeepMind, the AI company Google bought for a reported $500 million in January 2014, also concentrates on that end of the spectrum. It was DeepMind that created the AlphaGo system that beat a champion of Go, shattering expectations of intelligent machine performance and sending ripples of concern among those fearful of smart machines and killer robots.

While Giannandrea dismisses the “AI-is-going-to-kill us” camp as ill-informed Cassandras, he does contend that machine learning systems are going to be transformative, in everything from medical diagnoses to driving our cars. While machine learning won’t replace humans, it will change humanity.

The example Giannandrea cites to demonstrate machine learning power is Google Photos, a product whose definitive feature is an uncanny — maybe even disturbing — ability to locate an image of something specified by the user. Show me pictures of border collies. “When people see that for the first time they think something different is happening because the computer is not just computing a preference for you or suggesting a video for you to watch,” says Giannandrea. “It’s actually understanding what’s in the picture.” He explains that through the learning process, the computer “knows” what a border collie looks like, and it will find pictures of it when it’s a puppy, when its old, when it’s long-haired, and when it’s been shorn. A person could do that, of course. But no human could sort through a million example and simultaneously identify ten thousand dog breeds. But a machine learning system can. If it learns one breed, it can use the same technique to identify the other 9999 using the same technique. “that’s really what’s new here,” says Giannandrea. “For those narrow domains, you’re seeing what some people call super human performance in these learned systems.”

Our intricate, informal system of political intermediation, which took many decades to build, did not commit suicide or die of old age; we reformed it to death. For decades, well-meaning political reformers have attacked intermediaries as corrupt, undemocratic, unnecessary, or (usually) all of the above. Americans have been busy demonizing and disempowering political professionals and parties, which is like spending decades abusing and attacking your own immune system. Eventually, you will get sick.

The disorder has other causes, too: developments such as ideological polarization, the rise of social media, and the radicalization of the Republican base. But chaos syndrome compounds the effects of those developments, by impeding the task of organizing to counteract them. Insurgencies in presidential races and on Capitol Hill are nothing new, and they are not necessarily bad, as long as the governing process can accommodate them. Years before the Senate had to cope with Ted Cruz, it had to cope with Jesse Helms. The difference is that Cruz shut down the government, which Helms could not have done had he even imagined trying.

Like many disorders, chaos syndrome is self-reinforcing. It causes governmental dysfunction, which fuels public anger, which incites political disruption, which causes yet more governmental dysfunction. Reversing the spiral will require understanding it. Consider, then, the etiology of a political disease: the immune system that defended the body politic for two centuries; the gradual dismantling of that immune system; the emergence of pathogens capable of exploiting the new vulnerability; the symptoms of the disorder; and, finally, its prognosis and treatment.

To understand why Quest to Learn thinks games are crucial to the educational system, one first must take a look at why games are so compelling in the first place.

That’s easy if you talk to James Gee, a presidential professor at Arizona State University’s department of education, who has made a career out of assessing the usefulness of games.

“What a video game is, is it’s just a set of problems to solve — that’s it,” he said. “And it has a win state. You get feedback and you know when you’ve solved the problem. And then the game designer has to create good motivation for you to do that.”

Take “Angry Birds” as an example. It’s a game where smartphone owners are asked to use a digital slingshot to catapult birds across the screen and into towers of sticks with evil pigs — their enemies — hiding inside them.

That game is compelling, Gee would argue, because there is a clear problem (pigs that need to be pummeled), a feedback system (after each level, players are given stars based on how quickly they’re able to pummel said pigs) and, to some degree, an inherent motivational structure. Players who want to advance to harder levels (to “level-up” in gamer-speak) must improve their scores to do so — maximizing efficiency.

Something about it works: The game has been downloaded more than 1 billion times.

Quest is appropriating those ideas in a system it calls “game-like learning.” Instead of regular classes, kids are sent on missions where they’re expected to make their own discoveries and compete against other students or classrooms from the school.

Sometimes students here use video games and other high-tech tools — there’s a 3-D printer on site; laptops and iPads seem to be everywhere; kids play “The Sims” as part of class — but often they don’t. Duke’s “The Way Things Work” classroom looks pretty much like any other eclectic science class in America: bright posters on the walls, class pets in the back corner, a model skeleton leaning against the window.

It’s how the class is framed that’s different. Kids are told they are no longer students but explorers. They’re put inside a narrative that’s bigger than them — they’re dispatched on a “mission” to discover, in this case, the many mysteries of the metric system.

Then they play games in order to make those discoveries.

The magic of the school is that, just like in a video game, when one challenge ends another begins, co-founder Salen said. You move to the next level. The school is designed to create challenges that the students actually want to tackle, without worrying about grades or tests, just because they’re actually interested in the world.

Games “create a reason for young people to want to engage in a problem or around a set of content,” Salen said. “And then you make those resources around them available so they can do work and practice around that problem.”

Put another way: The carrot is always in front of the horse.

Like a bad motivational speaker, I’m a sucker for a good sunrise and Angkor Wat was delivering. This was the edifice that had survived since the 12th century and had miraculously been spared the Khmer Rouge’s rod of destruction during Cambodia’s 1970s genocide. It has inspired sages for generations and graces everything from the labels of local beers to the set of “Tomb Raider,” an architectural wonder draped in a sheet of spiritual mystery and marvel.

I took a breath and a sip, then raised my iPhone to the sky. Thirty seconds of cropping and captioning later, I posted on Instagram an odious, travel-envy shot of the moment, knowing very well that most of my friends back in New York City were cold, miserable urban yetis. Meanwhile, I was eating, praying and loving and now there was a 1080-by-1080-pixel image to prove it.

It sounds like a moment of pure trekking ecstasy. But it was fraudulent. 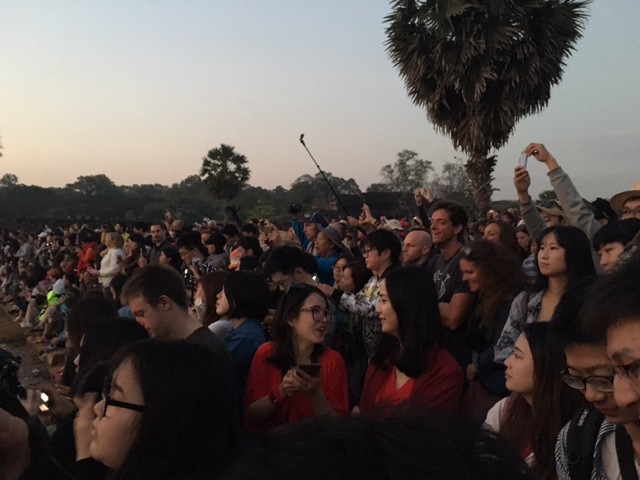 That scene — the fight for the perfect Instagram — is one I’ve witnessed over and over, on at least three continents during the last year or so. At times, it felt like destinations were morphing into mere photo sets. In New Zealand, I saw adventure companies that made getting the perfect photo-op part of their pitch for kayaking, hiking or ziplining expeditions. In Thailand, a woman next to me on a beach squealed to her friends about getting her hair just right for a shot destined for her Tinder profile. Back home in New York, I have more than once found myself in the crosshairs of a narcisstick aimed at a scraggly Elmo in Times Square.

Our desire to get the perfect sharable photo has even led to deaths by selfie, with Mashable reporting that in 2015 more people died from taking selfies than shark attacks. Last year, Disneyland banned selfie sticks at its theme parks, citing safety as a concern. The Russian government even released a guide for how not to die taking one, kicking the “safe selfies” movement into motion.

To be sure, these are extremes. But as I stood there in Cambodia, swatted by selfie sticks, bruised by elbows, perfumed by the body odor of my fellow photogs, I realized the irony of being at a temple in which no one was really present. Was Instagram ruining travel?

“Most humans are never fully present in the now, because unconsciously they believe that the next moment must be more important than this one. But then you miss your whole life, which is never not now.” – Eckhart Tolle

If you were forwarded this newsletter and enjoyed it, please subscribe here: https://tinyletter.com/peopleinpassing

I hope that you’ll read these articles if they catch your eye and that you’ll learn as much as I did. Please email me questions, feedback or raise issues for discussion. Better yet, if you know of something on a related topic, or of interest, please pass it along. And as always, if one of these links comes to mean something to you, recommend it to someone else.