A bit of adventure.

Yesterday Summer and I packed our bags and headed for the airport. Our plan was to catch a flight to Seattle and then another to Lihue Hawaii.

Well, we made the connection, but the flight was full. After we were sure we wouldn’t be making the flight we checked the departures board and attemped a flight to Honolulu and then one to Las Vegas. Having no luck on those flights either it was getting pretty late and the list of destinations was dwindling so we decided to return to Portland and try again on Friday.

Friday morning came early and we headed back to the airport, resuming our attempt at Hawaii. With no small amount of luck we got the last two seats on a flight to Maui. Neither of us have been to Maui before (this is my first trip to Hawai’i) and as of the time of this writing, I’m somewhere over the pacific sitting next to a cute couple with a seemingly endless supply of little Captain Morgan bottles that they have been kind enough to share.

Summer and I have nowhere arranged to stay when we arrive. For me, that’s the fun part. We’ll touch down in another couple hours and figure the rest out then. 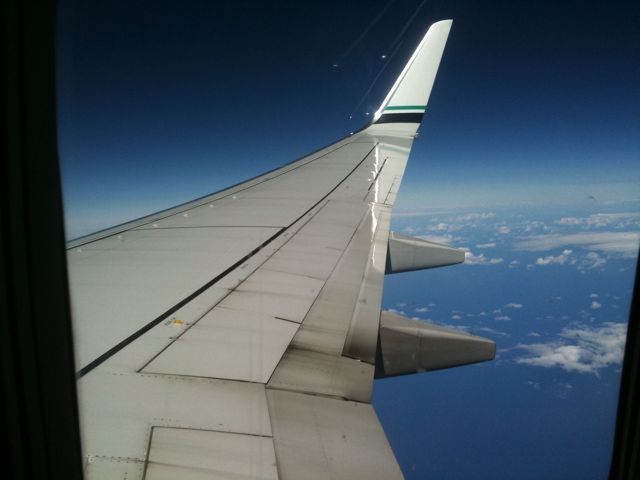 In this season of cynicism and spin I would like to point those that aren’t already familiar to Factcheck.org. Thankfully I’m not subject to the droves of “context-free” political ads on TV, as I don’t get any channels at home, but I always check Factcheck.org after political debates. It provides excellent coverage on both candidates and what was said, not said, and totally mischaracterized.

As with all things, DEMAND CONTEXT, check the facts, and make up your own mind. Above all, pay attention. This election requires more effort on your part than listening to the talking heads, sound bites, and believing that when someone says “you can check” that they’re telling the truth and not just hoping you won’t actually check.

We are a nonpartisan, nonprofit “consumer advocate” for voters that aims to reduce the level of deception and confusion in U.S. politics. We monitor the factual accuracy of what is said by major U.S. political players in the form of TV ads, debates, speeches, interviews and news releases. Our goal is to apply the best practices of both journalism and scholarship, and to increase public knowledge and understanding.

I decided to cobble together all the posts I wrote while traveling last year into a single page (sorry, multi-page code is broken). The blog always lists the most recent post, so if you weren’t reading along from the beginning it can be pretty difficult to navigate through and find all the pieces-parts of the trip.

I have made no edits to the posts themselves. Cleanup, elaboration, and grammatical fine-tuning still remain goals of mine. Just not today. Also, weighing in at a little over 30,000 words, I have not re-read the collected posts start to finish so I don’t know if it flows or is a herky-jerky narrative experience. Consider yourself warned.

All that said, I hope you enjoy reading it as much as I enjoyed experiencing and writing it.

Oh, and Happy Valentines Day too 🙂

Tagged as In desperate need of editing, Round The World, Travel, we are the knights who say NI, Writing

Sorry for the delay in getting this second batch of pictures up. I’m always looking to improve so any critiques are welcome.

All pictures are posted on my flicker page:
http://www.flickr.com/photos/digiboom

I’m off to Essen, Germany in the morning. Gonna give this Eurail thing a go.

It’s been 7 days and 1700 miles since my last post and lots of things have happened. My father and I left Sioux City on the 4th and arrived here in Charleston on the 8th. Stay tuned for notes on our stop by Mark Twain’s boyhood home in Hannibal Missouri, our visit to the Gateway Arch in St. Louis, the Wild Turkey and Buffalo Trace distilleries in Lexington, the National Corvette Museum in Bowling Green Kentucky, and various locations around Charleston.

This is just a quick update since I haven’t had time to compose my thoughts with all the driving and administrative this-n-that.

THE VAN HAS BEEN SOLD!!!! I posted the ad on Craigslist upon our arrival and within an hour I was talking to the guy who would eventually buy it from me the next morning. I had about seven other calls and emails the same day. My concerns about being able to move it quickly had disappeared.

With that hurdle cleared, the next was to find out when and where I would board my ship. This is still a moving target. While I know where I will board – Port Wondo – I still am trying to get a solid when. I’ve called several times in the past several days and the time has changed with each call. As of right now I will be boarding some time on Sunday the 12th…

Freighter Travel is not for everyone. I’m still waiting to find out if it’s for me. After talking with my grandfather, during my time in Sioux City, I’m thinking it may be a bumpier ride than I expected. I’ve got some expired Dramamine patches but hopefully I won’t need them.

So for now I’m in Charleston, and it’s hot, stupid hot, and humid, like heat index of 119 degrees. We’re keeping busy visiting WWII Aircraft Carriers and gazing at the Atlantic ocean.

Filed under Round The World, Travel, United States

Well, tomorrow morning my father and I head off for the East coast. Several things have changed in the past few days that make this a little more exciting than it was before. My cargo departure has changed yet again. Now instead of leaving from Savannah, GA on the 12th I’m leaving from Charleston, SC on the 10th, at 10am. This creates a few wrinkles…

We are now going to have to compress our leisurely stroll across the American Southeast from nine days to six. Originally I had budgeted two days to find a buyer for the van in Savannah, now I’m going to have to pull it off in one day in Charleston. Plus, I have yet to receive any information on where I’m to meet my ship.

I’ve spent the past two days doing all the things I should have been doing for the past several weeks. I got pretty complacent in my time here, but I think I’ll be ok. I’ve been packing and unpacking my bag trying to make everything fit. I didn’t realize how much I’d relied on the van for the extra goodies that are now making my bag weak in the seams. I’m wondering now how much of this stuff I’ll actually need. Odds are I’ll be getting rid of some of the more useless items during my first real month on the road. Either that or I’ll get a lot more efficient at packing them.

I’ll try and weigh my pack at some point to give you an idea how much all this adds up to. I’m pretty curious myself. One thing is for sure, I’m going to be in a lot better shape by the time I’m done.

In all I’ve had a lot of fun while I’ve been here in Iowa. I’ve met some great people and really caught up with some old friends. This is the single greatest amount of time I’ve spent in my hometown since I moved away 10 years ago. Any time before this was long enough to go out for drinks and thats about it. This time I got to really spend some time with friends and family. One night on my oldest friends porch he said to me “It’s been nice getting to know you again.” It’s rare to have friends that are willing to change with you and give you the chance to be different than when you used to spend all that time together. Those are the friends you need to make sure you know for the rest of your life. I’m very fortunate to have many of those friends.

I’d like to take a moment to thank everyone I’ve talked to about the trip over the past six weeks. Your continued support is very important to me. It has helped nudge me through my doubts and worries. I’d like to thank my parents for basically letting me move back in and feeding me. I’m thankful I got to spend the time with you that I did. And there is one person in particular I have to thank above all others. Summer, I couldn’t do this without your support, I’m very lucky to have you in my life. I love you very much.

I’m on the move again…